Welcome to your early look at the Netflix Originals currently scheduled to hit Netflix (mostly globally) throughout the month of October 2020. Here we have a list of the best new movies and Tv shows releasing in October 2020 on Netflix that you need to know.

October will see some of the biggest movies of the fall schedule headlined undoubtedly by the new entry from David Fincher, Mank.

As always, we’ll keep this updated as and when we learn of new Netflix Originals, and if you missed any of the September 2020 Originals go back here.

If you’re looking for more of the best New Movies and Tv Shows releasing in October 2020, you’ll have to wait until mid-September 2020 when we start getting word of what’s coming up next on Netflix. 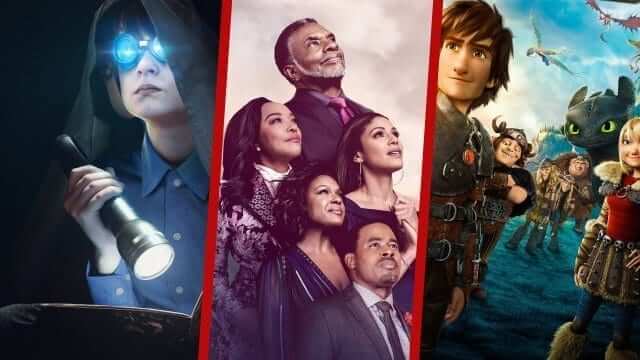 Carmen is back for a third outing, and her adventures continue to take her across the world, looking for the next big score.

Tolkein star Lily Collins stars in her second Netflix Original, taking on the lead role of Emily in Paris. The plucky new comedy series could be Netflix’s next smash-hit comedy series.

Emily, an American woman from the Midwest, moves to Paris for an exciting new job. Upon arriving, its clear cultures clash as the midwestern gal adjusts to Parisian life.

In order to become a success before she hits 40, Radha, a down on her luck playwright, reinvents herself as a rapper.

The Haunting of Bly Manor (Season 1)

With plenty of returning cast members, Netflix subscribers can look forward to the adaptation of the classic ghostly tale of The Turn of the Screw.

One of two new documentaries Netflix has produced based around the deaf community.

Here’s what you can expect from Deaf U:

“Deaf U is a coming-of-age documentary series following a tight-knit group of Deaf students at Gallaudet University, a renowned private college for the deaf and hard of hearing, in Washington, D.C.”

Netflix continues to pump out coming-of-age dramas of the woke variety, and that looks to continue with the release of Grand Army.

Told across the POV of five different students who attend a busy public Brooklyn High School, as they struggle to navigate love, sex, and life.

Aaron Sorkin writes and directs this promising historical drama taking us back to the late 1960s and covering the seven people on trial for their involvement in the DNC rioting in Chicago.

Netflix’s reboot of the classic Unsolved Mysteries series had an excellent start with its first-half released earlier in 2020.

Now, it’s returning and promising even more tales that never got answers. This season will also feature a ghost story that is perfect for Halloween!

The movie follows a newlywed who returns to her husband’s sprawling estate but finds herself in the shadow of his ex-wife.

Cadaver (or Kadaver as it’s known in Norway) is a horror movie written and directed by Jarand Herdal.

Set in the aftermath of a nuclear disaster, we follow a family attending a subsequent charitable event where people are mysteriously disappearing.

Based on the novel of the same name by author Walter Travis, The Queen’s Gambit stars The Dark Crystal: Age of Resistance star Anya Taylor-Joy and Bill Camp.

Subscribers can look forward to a total of five drama-packed episodes.

The collaboration between Netflix and Pearl Studio has generated one of the most exciting new Originals of 2020. Over the Moon, Netflix’s latest animated feature takes inspiration from one of the most beloved classic Chinese tales.

Our most anticipated movie of the month (and perhaps the entire year) is the next Netflix project from the famed director, David Fincher. In this movie, shot entirely in black and white, we’ll be following the development of the movie, Citizen Kane.

Expected to cover the French revolution, the only synopsis we’ve been given so far is “The 1% can be bloodied.”

Set in the future, this 10-episode TV adaptation of the novel of the same name is about what would happen when a simple DNA test would be able to tell you who your soul mate is.

Other Netflix Original Releases for October 2020

These are by no means confirmed by Netflix but we’ve heard that these could release in October. Pinch of salt!

If you mean for The Selena Series unfortunately Q. Productions has postponed the release date because of the rise of COVID cases. Mr. Abraham isn’t sure of the date for now.

Welcome to my world! I hope you like my blogs. Keep spreading love.

Every update of “Scream Season 4”: Releasing Date On Netflix | Casts | Storyline | Trailer and other details!

List of best Upcoming Series on Netflix This Week: September 14th to 20th, 2020

Every Update Of The Dragon Prince Season 4: Anime series Release On Netflix’s in 2021 | Cast | Plot | Storyline

The Most Energetic And Phenomenal RJs Of Jammu Doing Their Best During This Pandemic.

Radio Jockey is a person who makes our travel time more interesting and fun. Let it be a sunny day

5 Effective Ways To Improve Your Immunity At Home During Lockdown